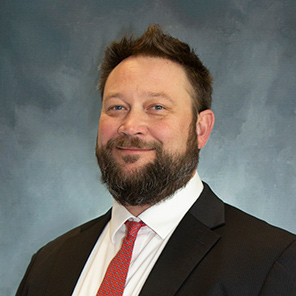 Mr. Olsen received a Bachelor of Arts in Philosophy, with a minor in Political Science from Texas Christian University. Mr. Olsen obtained a Master of Arts in Management and Leadership from Webster University in 2008 while serving as a Field Artillery officer with the U.S. Army in Baghdad, Iraq. Mr. Olsen earned his law degree from the University of Tulsa College of Law in 2012. During law school, Mr. Olsen served as an editor of the Tulsa Law Review, a member of Phi Delta Phi, and president of the Federalist Society.

Mr. Olsen received his license from the State Bar of Oklahoma in 2012. Mr. Olsen is admitted to practice in the United States District Courts for the Northern, Eastern, and Western Districts of Oklahoma and the United States Court of Appeals for the Tenth Circuit. Mr. Olsen acts as secretary of the Craig County Bar Association and is a sustaining fellow of the Oklahoma Bar Foundation. Mr. Olsen was selected for Super Lawyers, Oklahoma Rising Stars, 2016 & 2018.

Mr. Olsen is a Rotarian with the Vinita Rotary Club and volunteers for various charitable events through his church.